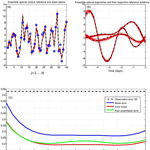 Abstract. Data assimilation is considered as a problem in Bayesian estimation, viz. determine the probability distribution for the state of the observed system, conditioned by the available data. In the linear and additive Gaussian case, a Monte Carlo sample of the Bayesian probability distribution (which is Gaussian and known explicitly) can be obtained by a simple procedure: perturb the data according to the probability distribution of their own errors, and perform an assimilation on the perturbed data. The performance of that approach, called here ensemble variational assimilation (EnsVAR), also known as ensemble of data assimilations (EDA), is studied in this two-part paper on the non-linear low-dimensional Lorenz-96 chaotic system, with the assimilation being performed by the standard variational procedure. In this first part, EnsVAR is implemented first, for reference, in a linear and Gaussian case, and then in a weakly non-linear case (assimilation over 5 days of the system). The performances of the algorithm, considered either as a probabilistic or a deterministic estimator, are very similar in the two cases. Additional comparison shows that the performance of EnsVAR is better, both in the assimilation and forecast phases, than that of standard algorithms for the ensemble Kalman filter (EnKF) and particle filter (PF), although at a higher cost. Globally similar results are obtained with the Kuramoto–Sivashinsky (K–S) equation.

How to cite. Jardak, M. and Talagrand, O.: Ensemble variational assimilation as a probabilistic estimator – Part 1: The linear and weak non-linear case, Nonlin. Processes Geophys., 25, 565–587, https://doi.org/10.5194/npg-25-565-2018, 2018.
Special issue
Numerical modeling, predictability and data assimilation in...
Download
Short summary
Ensemble variational assimilation (EnsVAR) has been implemented on two small-dimension non-linear chaotic toy models, as well as on a linearized version of those models. In the linear case, EnsVAR is exactly Bayesian and produced highly reliable ensembles. In the non-linear case, EnsVAR, implemented on temporal windows on the order of magnitude of the predictability time of the systems, shows as good performance as in the exactly linear case. EnsVar is as good an estimator as EnKF and PF.
Ensemble variational assimilation (EnsVAR) has been implemented on two small-dimension...
Read more
Share