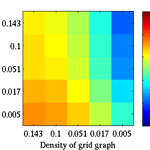 Abstract. Complicated systems composed of many interacting subsystems are frequently studied as complex networks. In the simplest approach, a given real-world system is represented by an undirected graph composed of nodes standing for the subsystems and non-oriented unweighted edges for interactions present among the nodes; the characteristic properties of the graph are subsequently studied and related to the system's behaviour. More detailed graph models may include edge weights, orientations or multiple types of links; potential time-dependency of edges is conveniently captured in so-called evolving networks. Recently, it has been shown that an evolving climate network can be used to disentangle different types of El Niño episodes described in the literature. The time evolution of several graph characteristics has been compared with the intervals of El Niño and La Niña episodes. In this study we identify the sources of the evolving network characteristics by considering a reduced-dimensionality description of the climate system using network nodes given by rotated principal component analysis. The time evolution of structures in local intra-component networks is studied and compared to evolving inter-component connectivity.