Special issue: Waves in media with pre-existing or emerging inhomogeneities... 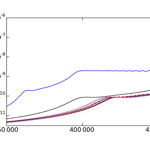 Abstract. The influence of fluid injection on tectonic fault sliding and seismic event generations was studied by a multi-degree-of-freedom rate-and-state friction model with a two-parametric friction law. A system of blocks (up to 25 blocks) elastically connected to each other and connected by elastic springs to a constant-velocity moving driver was considered. Variation of the pore pressure due to fluid injection led to variation of effective stress between the first block and the substrate. Initially the block system was in a steady-sliding state; then, its state was changed by the pore pressure increase. The influence of the model parameters (number of blocks, spring stiffness, velocity weakening parameter) on the seismicity variations was considered. Various slip patterns were obtained and analysed.